Due to recent domestic and international political and economic upheavals, as well as to corona crisis and its consequences, the Russian pet market meets new challenges and changing conditions. Business environment and the whole industry is changing and adapting to the new reality though, proving to have good resistance to these adverse effects.

The Russian pet market started to develop in early 1990’s. Small stores with limited range of pet products emerged, dog breeders were smuggling pet goods from their trips to dog shows abroad, ‘manufacture’ of leather and textile dog collars and leashes were organized in the kitchens of people who were thrown out from their jobs after the Soviet Union had collapsed and ‘perestroyka’ had begun.

In 1991, Mars introduced industrial pet food to Russian pet owners and the country had never been the same again. Pet stores, importing and wholesale companies popped out like mushrooms in the rain. The first pet trade exhibition erupted.

Historically, many Russian pet companies have been engaged in multiple fields at once: manufacturing, distribution and/or wholesale, and retail. The reasoning was multi-layered profitability. Over the years, business tended to grow in general, expanding its reach and scale. Organic growth resulted in the need to diversify business, to separate activities into separate companies.

After 2015, after the crisis and under changing economic conditions, the survivors were becoming increasingly more professional and performance focused. By now, and corona crisis made this process going faster and more intensive, the market is undergoing a fundamental adjustment. Future oriented strong brands use new challenges as a trigger to develop faster and weaker companies are becoming less and less powerful.

The Russian pet market is very diverse and this diversity starts from the geographical and population characteristics.

The first and the main fact everybody knows about Russia is that it is territorially very big. Russia is the largest country in the world. It’s almost two times the size the USA, it has 9 time zones and shares the border with 14 countries.

Russian human population is almost 147 million people. Central region is the most highly populated and on the Eastern half of the territory (see Siberia and the Far East coloured in light green) only 25 mln people (about 17% of population) live. It is actually about the population of two mega cities – Moscow and St. Petersburg. 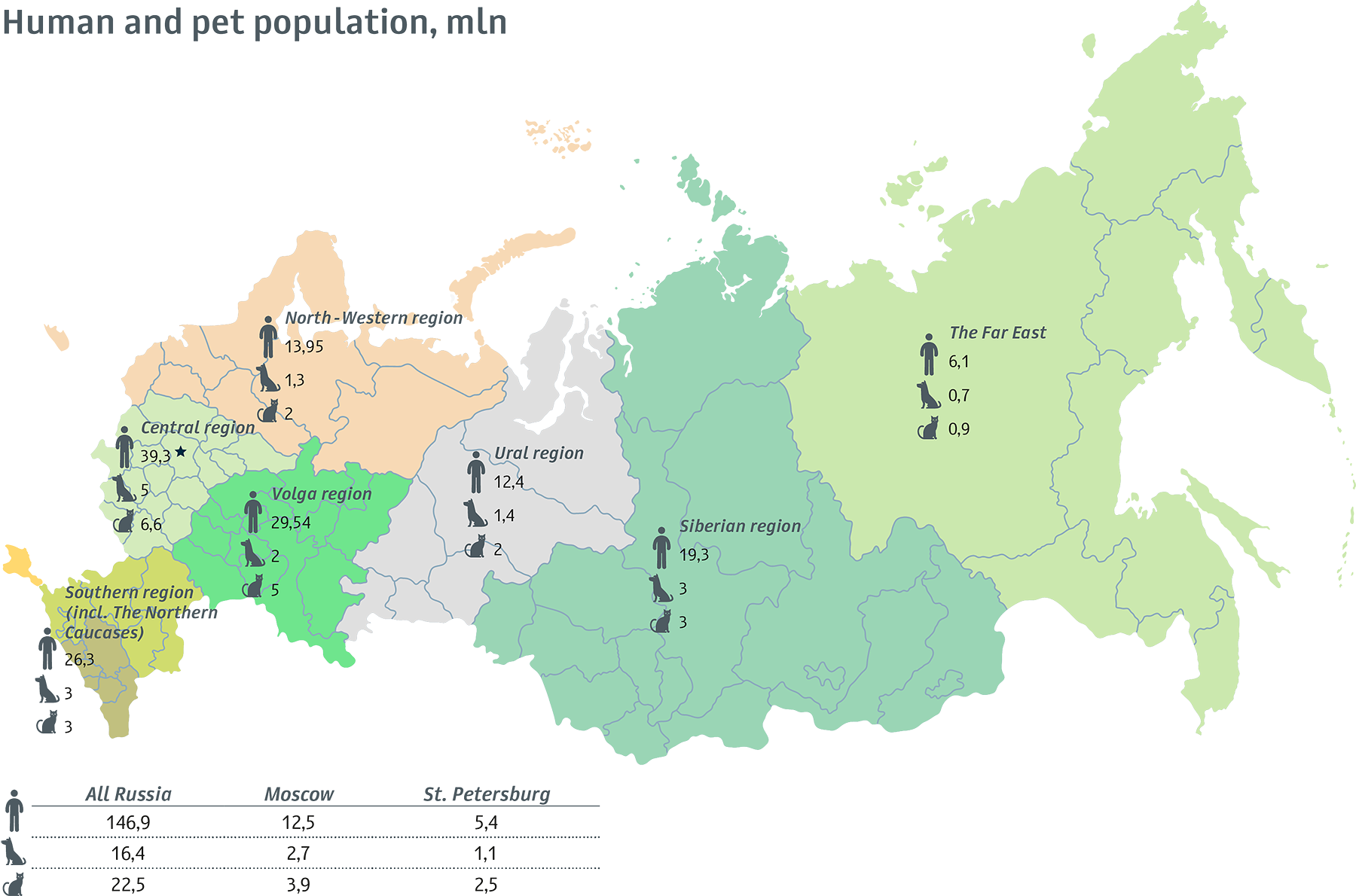 Approximately 75% of the population lives in urban centers. There are 16 cities with over a million inhabitants, in which over 40 mln people (1/3 of the total population) live.

More than a half of households in Russia (55,5 mln) keep a pet. The number of cats and dogs it’s 22,5 mln and 16,5 mln respectively. According to recent Mars company research those numbers are even higher – 33,7 mln of cats and 18,9 mln dogs. There are also millions of birds (3,1 mln), hamsters, billions of fish and many other pets people keep. The pet population has been remaining more or less the same over the past ten years in Russia, but within the isolation period in corona times breeders and retailers report the increasing demand for dogs, rodents and fish. At the same time, there is a totally opposite tendency – unfortunately the number of stray dogs and cats is increasing. People are losing their jobs and get rid of their pets, the shelters are full.

What is also very diverse in Russia is income levels in different regions and the knowledge about pet products as well. Less than 30% of the cats and 15% of dogs in Russia are fed with industrially prepared food. So the Russian pet business community have much opportunities to increase pet care culture, as well as pet adoption. 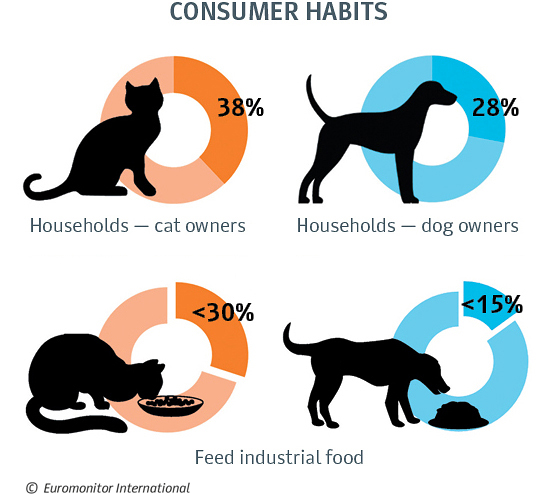 The Russian market structure is very much different from the global one. As cats are the most popular pets (about 33% of households in Russia own a cat), quite a large share of the market belongs to cat food – 67% according Euromonitor. And it shows a significant growth over the years.

The dog food share is comparatively small – about 20% only and it is currently stagnating or even slightly decreasing. The share of other pet foods: for small mammals, birds, fish, reptiles is 2,5%.

The non-food category has just 10% of the market with stagnating or even decreasing tendency, due to macro-economic reasons especially after the corona crisis. However, long home isolation has pushed sales of certain product categories which had been going down before, such as rodent accessories, aquaria decorations, pet shampoos and grooming instruments. 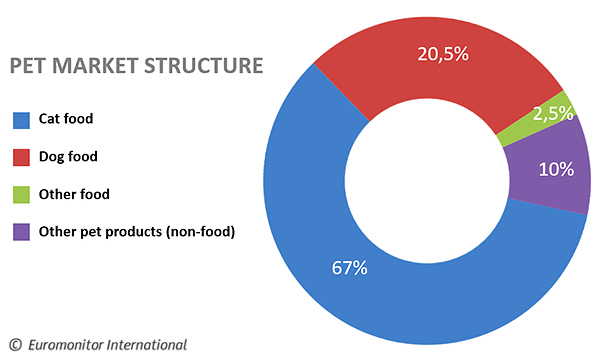